Why Haven’t We Seen Spider-Man in Marketing for Civil War?

The release of Captain America: Civil War is less than four months away and one of the big questions that fans have had is, “Why haven’t we seen Spider-Man, yet?” At first it seemed likely that Marvel was waiting for the “OK” from Sony, when we reported that Sony execs had viewed early footage of Civil War, so they could give their stamp of approval for Spidey’s appearence in the movie. But now that this has happened, what’s the hold-up?

Initially, it was hinted that the reason fans wouldn’t get an early glimpse of the new Spider-Man was because they want to make full use of the element of surprise. Makes sense. This is third time the character has been rebooted in the last decade and a half and both Sony and Marvel/Disney are putting a lot on the success of said reboot. Sony, perhaps more the Marvel, has much riding on how the fans respond to this “All New, All Different” Spider-Man. After all, this unique deal between the companies only happened after the “failure” of The Amazing Spider-Man 2.

In the new deal, Marvel can use Spider-Man in their movies, but Sony still has creative control over the character. By allowing this, though, Sony has figuratively and literally, released Spidey from the prison of the miniaturized universe that he was being held hostage in, allowing for a spectacular homecoming to the Marvel Cinematic Universe for our favorite wall-crawling superhero. Sony is no doubt hoping that this gesture of good faith will result in more fan loyalty when their as of yet untitled Spider-Man reboot hits the theaters next year.

But it goes a little deeper than just the “surprise” aspect of the web-head’s appearence. In a Collider-hosted Q&A co-directors of Captain America: Civil War Anthony and Joe Russo recently had this to say:

“The reason why we still won’t talk about [the costume] is that Marvel and Sony still have to work out what uses they have for the character, on a promotional level, on a commercial level. There’s still complications as far as that goes that involves business deals.”

Watch the full interview below (the Spider-Man content starts at 37:26):

So, there it is. The ugly face of beauracracy reveals it’s ugly head. While Marvel has to rights to have Spider-Man in their movies (as well as the bonus of MCU characters appearing in Sony-produced Spidey movies, yay!), there are still some things up in the air as far as marketing goes. While we did recently get a look at a new Spider-Man hoodie that has been confirmed as officially licensed and “designed in partnership with Marvel, who provided all the design elements from their 2016 merchandise range, including the ‘messy’ webbing which we haven’t yet seen in any prior Spider-man costume.”

But whether or not it’s related to Civil War, the upcoming reboot (which is unlikely as no mention of Sony was made), or neither isn’t known. We might not see anything of Tom Holland as Spider-Man (apart from a candid shot in a Quinjet) until Captain America: Civil War makes it’s way into theaters on May 6th.

Do you enjoy reading our site or listening to our podcast? Then consider joining the Friendly Neighborhood Spider-Talk Members Club to support our continued work. 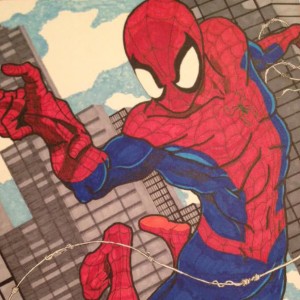 PrevPreviousWho is “Dead No More”?
NextNew Ultimate Spider-Man vs. the Sinister 6 TrailersNext